Buying a house has always been a part of the American Dream. But it can feel out of reach when the market is hot, as it has been of late: Home prices have climbed almost 6 percent over the past year, and are predicted to go up more than 4 percent over the coming year, according to Zillow.

Location still plays a huge factor in the cost of a home, but when prices reach record highs — as they did in California this year, when the median home price in the state surpassed $600,000 for the first time — it makes the prospect of becoming a homeowner seem even more daunting.

The following three women, however, made buying a home a priority, even when it got tough. Of course, their strategies may not work for your situation, and it’s always worth talking to a financial advisor and real estate pro to figure out what’s best for you. But here’s hoping you gain a little inspiration from learning how they achieved their homeownership dreams.

I have an interest in personal finance and wanted to eventually own and rent out real estate to generate passive income. That plan took a sharp turn after I broke up with my partner and had to move out of my apartment (we’d lived together for three years). I decided I wanted to buy my own place so I’d never be in that position again.

I found a place to rent by myself for $2,400 a month — almost double what I’d been paying before — which really motivated me to save for a down payment and control my housing costs.

Then I stopped spending on my weakness: clothes. I realized I was spending over $300 a year at Forever 21 alone. It had to go! I cut out clothes shopping completely unless it was a repair or replacement for something I needed for work. I also became a sales master, using online shopping codes and cashback sites like Ebates and Honey when I did shop.

I biked to work instead of driving, cut eating out significantly and used apps to track my spending so I could stick to my budget. With frugal living, I saved over $38,000 in two years. I was also able to tap another $3,000 from investments.

I bought my townhouse in LA a year ago at age 25 by putting down $48,000 — $42,000 for the down payment and $6,000 in closing fees. Ultimately, I decided against putting the traditional 20 percent down, so I pay $100 in private mortgage insurance (PMI) each month. But I plan to refinance soon, and with market growth and some work I’ve done on the house, I’m hoping it will increase the home’s value enough to put me at 20 percent equity, at which point those PMI payments will disappear. If I’d waited to have 20 percent in cash, I might have been priced out of the neighborhood I wanted.

I'd previously been forced to move so many times because of work, relationships or rising rent costs. Suddenly I had a home base with stability. My advice for future homeowners is to search broadly. I thought I needed a home in a specific neighborhood, but you learn to build your community wherever you land.

I wanted a house for both practical and sentimental reasons. As a public-sector employee with student loans, I saw how quickly house prices were rising and worried about being priced out of the Atlanta metro area. Buying a home was also important to me as a Southern black woman whose family couldn't always legally own property in the U.S.

My most powerful form of savings came from moving back home with my mom. I paid her $200 a month, which enabled me to save $1,000 a month on living costs. This also helped me save on transportation — I had a shorter commute to work and could take public transit.

After two years of saving, I bought my house at age 35. I purchased a short sale (when the owner sells it for less than what they owe on the mortgage, which means they and the bank lose money on the sale) with an 85/10/5 piggyback mortgage. This type of mortgage is actually two separate loans. My first mortgage was 85 percent of the home’s value, the second was 10 percent, and then I put 5 percent down upfront — in this case, $25,000.

This has worked for me, and I’ve already paid off my second mortgage, a 15-year term, in just under three years. It was my highest-interest debt at 7 percent, and I wanted to pay it off as quickly as possible. I currently have about $100,000 of equity in the house and am debating selling, which would enable me to buy another place with 20 percent down and to fund other financial goals.

My advice to other homebuyers is to set a realistic budget for the house you can actually afford and maintain, rather than stretch yourself with the maximum the bank will loan you.

I wanted to buy a house to have my own space. I have dogs and horses, and I just generally love country living, so it was important to me to be able to enjoy that all in one place! I also love DIY home projects, some of which are hard to do when you’re renting.

I cut my expenses a lot: getting rid of cable, lowering my cellphone bill, shopping at cheaper grocery stores. The biggest thing was moving 20 minutes outside the city where I work. I rented a two-bedroom, two-bathroom house with a garage, yard and storage shed for $695 per month — less than half of what it’d cost me if I lived closer to my office. And I started farm-sitting — as in, babysitting farm animals — to stash away an extra $400 or so a month.

I was able to get my expenses down to about $1,800 a month and saved over half my income, usually about $2,000 a month. The day my direct deposit hit, I immediately transferred the difference to a bank account I labeled "Down Payment Savings." It was the extra motivation I needed so my brain was never tempted to pull from it.

I saved $40,000 over two years and closed on my house when I was 28. This amounted to 15 percent down, so I pay $110 per month in PMI. While I had enough saved to put down a traditional 20 percent, I wanted to keep some cash on hand to make repairs to the house sooner rather than later. Being a homeowner means I can do what I want, how I want, when I want. For example, my place has a very small, poorly designed kitchen. But because I own it, I can draw up plans and totally renovate the space.

If you’re considering becoming a homeowner, take time to interview real estate agents and pick someone you mesh with. A good agent is worth their weight in gold — mine helped me so much with her knowledge and honesty. 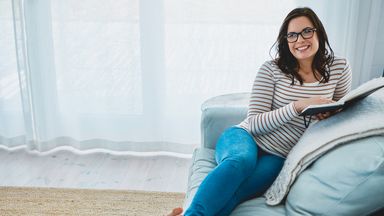 Can You Buy a House When You Have Debt? 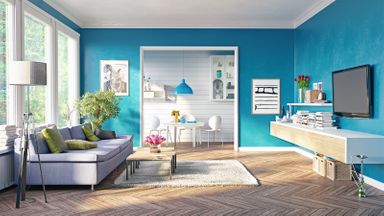 Is It Better to Rent or Buy? 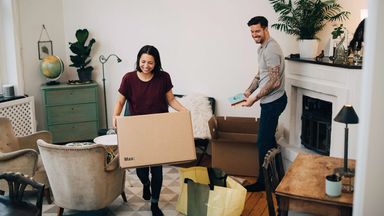