Here, one woman shares how she and her husband cut costs and paid down $35,000 of debt in two years.

For Makenzi Wood, graduating from college was a wake-up call. She left school with $25,000 in student loan debt and a $10,000 car loan. “I emerged into post-college life with $35,000 of debt and no clue how to manage my money or my life,” she says. “My parents and friends told me that debt was normal. But after I graduated from college, I felt so foolish that I ruined my clean slate with a big mound of debt."

Wood, who lives in San Antonio, Texas, and works as a marketer, decided that she was going to get out of debt as quickly as possible, a process she documented on her blog, Picky Pinchers. In all, it took her and her husband Jeremy two years to pay off the full $35,000. Here’s how they did it.

Wood’s biggest challenge when it came to repaying her debt? An impulse-shopping habit. “I wasted over $1,000 in six months on useless trinkets like cheap rings that turned my fingers green, obviously fake hair extensions, and cheap dresses that unraveled in days,” she says. “I got an immediate rush the second I ordered these items. The rush peaked when I got the package at my doorstep and gave the new, shiny item a whirl. But after I opened the box, it was over.”

Using the cash envelope system helped to reduce her impulse shopping habit by clearly limiting what she could spend. She took out her weekly budget in cash and divided it into different envelopes based on her budget categories. “The cash envelope system worked beautifully,” Wood says. “I couldn’t swipe a magic piece of plastic and have everything my heart desired. If I didn't have the cash for it, I didn't buy it, period.”

“I got an immediate rush the second I ordered … but after I opened the box, it was over.”

GETTING CREATIVE IN THE KITCHEN

When Wood first examined how much they were spending each month, she was surprised to realize that $1,000 went to food. “I took a good, hard look at how I spent grocery money,” she says. “I bought way too many processed items, like loaves of bread, marinara sauce, soups, chips, yogurt, and sweets. I realized the key to cutting our food budget was to cook in season, shop sales, and use coupons.”

She found a list of seasonal foods online, and she subscribed to her grocery store’s newsletter so she could know when to stock up on things like blackberries, arugula, or butternut squash. Wood also invested in a vacuum sealer to preserve foods year-round. “When cucumbers were in season during the summer, for example, most of my meals incorporated a cucumber item,” she says. “I'd make Greek gyros with homemade tzatziki cucumber sauce, cold cucumber gazpacho, and even cucumber boats filled with hummus as a snack.” Soon, Wood was whipping up her own bread and yogurt, fermenting her own kombucha and even growing some of her own food in her garden.

She also discovered the joys of pantry cooking. “Each week, I’d go through my pantry and document all the ingredients I had to use up,” she says. “For example, if I saw hot dog buns, ground beef, and onions, I'd make meatloaf — the hot dog buns would be used as bread crumbs.” Instead of eating out as frequently, Wood invited friends to her apartment, where they happily split a box of wine. “It was way cheaper and more fun than going to a bar,” she says.

With simple changes, her monthly food budget shrunk to $400.

With a $10,000 car loan haunting her, Wood didn’t want to go into more debt to buy a second car. Her husband needed to drive, but Wood didn’t: She worked a mile away.

So she walked. “I estimate that I saved $20 a day in car payments, maintenance, and gas by walking,” she says. “We were able to save up cash to buy a second vehicle so we could remain debt-free. That freed up enough income each month to make extra payments on my debt.”

And while she doesn’t think others have to walk to work every day, Wood believes that the fact that she and Jeremy took their debt so seriously is what made them successful.

Now, her feel-good rush comes from knowing she’s financially stable, and not from ordering knick-knacks online. “When I came out of college, I had a ball and chain around my ankle. Paying off debt has lifted that burden,” says Wood. “I'm so much freer now. If I have a medical emergency, I can cover it. If I want to quit my job suddenly, I can. If I want to take an international trip, I can make it happen.”

So far, she’s taken full advantage of her new life. The Woods recently bought and renovated a home, and they took an impromptu vacation to San Francisco last month. “I used to live in a world of 'no' when I had debt,” she says. “But now my life is full of 'yes.'” 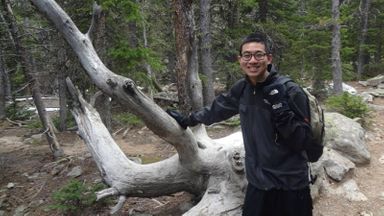