Here, one couple shares how they cut costs and paid down $120,000 of their debt in two years.

Monica Louie and her husband Michael thought that debt — in their case, $320,000 worth — was just a part of life.

But when Monica, now 36, decided that she wanted to quit her job at 32 and start her own business while she was pregnant with her second child, the Louies’ feelings about owing money changed. “We were focused on transitioning to a single income,” says Monica. “We knew that becoming debt-free would make our financial situation a lot stronger, so we decided to dive in.”

Reducing debt and expenses would allow Monica, who now runs her consulting business, to enjoy the time at home with her young children Jayden, now 6, and Madelyn, now 4. Her priority: having the freedom to gradually build her business. But she feared that their lifestyle and debt would put too much pressure on her.

“We made it fun to focus on how much debt we could pay off.”

In 2013, the Louies buckled down and did everything they could to repay their debt. They sold duplicate belongings that they had from when they got married, and stuff that Monica had inherited from her mom and was not using. “We had a very successful garage sale where we made nearly $1,600,” says Monica. “It felt like we were moving forward every time we sold something and were one step closer to our debt-free goal.”

Then Michael, 37, started listing unwanted items on Craigslist and OfferUp, including big ticket items like a home gym and his motorcycle. “We would ask ourselves if we would rather keep the item or potentially have more to put toward our debt,” he says. “Most of the time, we opted to try to sell the item.”

They chose to replace Michael’s car with a cheaper model. Michael also started taking the bus to work, which provided additional savings on insurance and gas. They put that money towards their debt.

MAKING IT A GAME

The Louies would make a game of spending less every month. “We challenged ourselves to stick to a $400 grocery budget one month, even though we were trying to eat healthy and eat out less,” says Monica.

She became vigilant about combing through bills for errors. “If we did get overcharged, I made sure to follow up on the refund until we received it,” she says.

She also looked for less expensive providers for cable and cell phones. “We did whatever we could to lessen the amount of money that was going out,” she says. “Every month, we made it a game and made it fun to focus on how much debt we could pay off.”

The expense-reducing, selling and working overtime paid off nearly $90,000.

In 2015, the Louies decided that downsizing their home made sense. Not only would they be able to pay off their home equity line of credit by the middle of the year, but they also didn’t need the space. “We realized that our house was a huge asset that we could leverage to reach our goal,” says Monica. “We had bought this beautiful six-bedroom house in 2009 when we were newlyweds and thought we would have three to four kids. But after having two, we realized that it was a good number for us, and our house was just too big for a smaller family.”

Since the value of the home had increased, they had a significant amount of equity in it — enough to put more than 30% down on a smaller house and pay off the HELOC. Their total debt was down to $200,000.

After two years, they reduced their debt by $120,000 and put $40,000 into their savings. And the challenge actually helped their marriage, they say. “Working together toward this huge, massive goal that felt completely audacious has really brought us closer together,” says Louie. “We had to work together as a team. We were constantly staying updated with each other and our communication greatly improved. That feeling of freedom is what kept us going.” 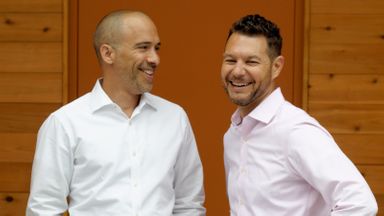 This Couple Erased $51K in Debt in Just 2 Years 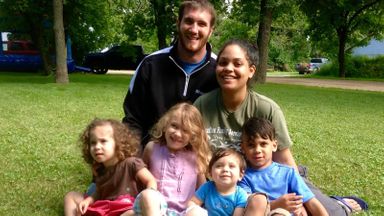