Sweeping tax changes are one step closer to reality now that the Senate has passed its own tax bill. But there’s still a lot that could change before the legislation is final, because the bill that passed the Senate is different than what passed the House earlier this year. While some provisions are the same and likely to be a part of the final package, others will need to get worked out in a conference committee, led by leaders from both the House and Senate.

This is a key provision to watch as it’s one of the main ways the government determines how much you will pay in taxes each year.

Both the House and Senate would cap the amount of mortgage interest you can deduct. Mortgages that are eligible for the interest deduction are limited to $500,000 under the House bill, while the Senate bill keeps the current limit of $1 million.

Both the House and Senate bills still allow a deduction for local property taxes, but only up to $10,000. This is a change as initially the Senate bill got rid of this all together.

They’re gone. Both bills repeal the $4,050 personal exemption you could claim for yourself and each of your dependents.

Although the House bill would repeal the AMT — an additional tax initially intended to keep high earners from using loopholes to avoid paying taxes — the Senate version proposes keeping it.

While the House and Senate bills differ on whether to eventually eliminate the estate tax, both would raise it immediately to more than $10 million dollars. The House bill would eventually repeal the estate tax by 2024. The Senate version leaves it in place.

The House bill drops the top rate on pass-through businesses income — which are businesses whose income passes through to its owners’ personal tax returns — to 25 percent. The Senate bill would let most business owners deduct 23 percent of their income.

Both the House and Senate would cut the corporate tax rate from today’s 35 percent to 20 percent. But the two bills differ on timing. The House bill would cut the rate in 2018. The Senate plan would wait until 2019 for it to go into effect. 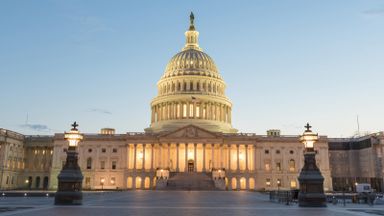