The on-again-off-again-on-again stimulus discussions on Capitol Hill — and Twitter — pushed and pulled the markets throughout the week. Stocks rose Monday and Tuesday on word a deal was imminent but hit an air pocket Tuesday afternoon when President Donald Trump announced, via Twitter, he had halted negotiations and accused House Speaker Nancy Pelosi of “not negotiating in good faith.”

But the ice thawed quickly. Talks were back on by Thursday and come Friday economic advisor Larry Kudlow said the president had approved a revised deal after encouraging negotiators to “go big”. When markets closed at week’s end, stocks had rallied past the Tuesday hiccup and posted one of their best weeks since July.

Investors can be forgiven for experiencing a little déjà vu. That’s because the negotiation metronome is ticking at a cadence matching trade talks with China. Throughout 2019 a deal was on, a deal was off; tariffs were threatened, imposed, lifted and threatened again. Stocks, just as they are now, bounced beat for beat with the heartbeat of headlines about negotiations. Our message then was the same as it is today: step back from the market’s daily rhythm and pay closer attention to broader, underlying trends.

As we outlined in our recently published Q3 commentary, consumers and businesses are adapting, treatments are improving and vaccine candidates continue marching through key stages of development (big announcements on late-stage trials are expected to filter through fall and winter). Broad sectors of the economy — particularly the housing market — have now clawed back much of what was lost during the height of pandemic-driven uncertainty and disruption in spring.

Even if stimulus doesn’t materialize in the coming weeks, we don’t believe it would be an absolute market-breaker given the economy found its sea legs in Q3 and is adjusting to a “new normal”. Of course, additional stimulus would help pull struggling Americans out of the valley faster.

Just as we said during last year’s trade negotiations, we believe lawmakers will eventually reach a deal. While the window for Congress to approve aid before the election is closing, we still anticipate another round in the coming months no matter the election outcome.

Going Big on Stimulus? On Tuesday, Federal Reserve Chairman Jerome Powell warned it’s the wrong time for policymakers to withhold additional fiscal support for the economy. Powell said failing to lend further support could lead to a “weak recovery, creating unnecessary hardship for households and businesses.” He added that “the risks of overdoing it seem, for now, to be smaller.” So, through the week lawmakers attempted to put their foot on the fiscal gas.

The latest deal coming from the White House as of Friday called for a $1.8 trillion coronavirus relief package. That’s shy of the $2.2 trillion plan passed by the House, but a step up from the White House’s original $1.6 trillion proposal. House Speaker Pelosi and Treasury Secretary Steven Mnuchin reportedly discussed contents of the latest proposal Friday. A primary point of ongoing disagreement regards aid to state and local governments. Aid for airlines, small businesses, unemployment assistance and another round of direct checks to Americans are all options on the table.

Services Shine in the U.S.: The U.S. services sector, which accounts for roughly 70 percent of GDP, saw another uptick in activity in September. The Institute for Supply Management said on Monday that its non-manufacturing index rose to 57.8 last month compared to 56.9 in August (any level above 50 indicates growth in the sector). The reading is more evidence the economy is healing, a theme that was the hallmark of Q3.

A Similar Tune in China: In China, the services sector grew in tandem with the U.S., The Caixin/Markit services PMI rose to 54.8 in September, up from August’s 54. That’s the highest read since June and extended the sector’s recovery into a fifth consecutive month. Like the U.S., the services sector accounts for most of China’s economy at 60 percent. Hiring expanded for the second month in a row, and railway passenger trips reached 13 million on Oct. 1, the most since the outbreak began in February.

Taken with the U.S. data, we’re now seeing improvement in key growth sectors of the world’s two largest economies, and that could provide a nice tailwind for the global economy.

Therapeutics in the Spotlight: Just over a week removed from his stay at Walter Reed, President Trump is back on the campaign trail with a rally slated Monday in Florida. Although the president received several treatments, Regeneron’s dual antibody treatment was singled out as particularly beneficial. If the drug is approved for use by the FDA, the U.S. government says it will provide 1 million doses of the treatment at no cost.

In the same ballpark, Eli Lilly & Co. asked FDA regulators to approve emergency use of its single antibody treatment (it’s also working on a dual antibody therapy). The company also entered into an agreement last Thursday with the Bill and Melinda Gates Foundation to potentially supply of these antibody therapies to low- and-middle income countries.

Earnings Season Opens: Earnings season gets into full swing this week, and it’ll be heavy on financials with big banks like JPMorgan Chase, Bank of America and Citigroup reporting along with regional banks, asset managers and insurance companies. We’ll be paying close attention to banks’ provisions for loan losses, charge-off rates and other key metrics about their book of loans. Given the low interest rate environment, investors will also be closely watching revenue generation in other operations, especially at the bigger banks.

A Check on Retailers: Quietly perhaps, retail sales figures surpassed their pre-pandemic levels back in July and have steadily risen since. Sales certainly recovered at a torrid pace out of a historic rut in spring, but the rate of growth has moderated. While the savings rate remains historically high, data show Americans are spending down some of those savings over the past few months. Are stalled aid negotiations affecting spending? We expect that to be a storyline through the week.

And Small Business: The NFIB also releases its survey of small business owners this week. As always, the tandem reporting of retail sales and small business confidence offers a pretty good glimpse of consumer health and employment trends. 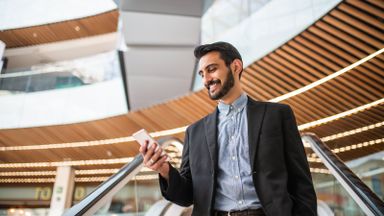