Is it a V? Is it a U, or “saggy” U? Maybe it’s a swoosh or closer to a square root symbol? At this point, if you charted the number of shapes used to forecast the recovery, it would resemble a hockey stick.

So, let’s keep it simple: We believe the economy is well on the road to recovery. The worst is likely behind us but there are going to be a few bumps along the way. That’s especially true in the short term. The market’s mood is changing with sentimental winds, and that’s driving the sharp gains or pullbacks we’ve been seeing (Thursday’s decline, for example).

But zoom out to a more intermediate- or long-term view, and the big picture remains constructive. We’ve come a long way in terms of testing and vaccine development. We’re getting better at pinpointing outbreaks and protecting vulnerable communities. For that reason, we don’t believe another nationwide shutdown is likely. Instead, responses to outbreaks will be more localized and far less disruptive.

The Federal Reserve also affirmed that interest rates will remain low, and the central bank will continue to do what’s needed to support the recovery. Altogether, we believe this means we have already plumbed the depths of the economic downturn, and our climb out of this valley will support the market going forward. Thursday’s decline, in our view, was more of a pause than a change in direction.

The Fed and the Road Ahead: While markets soared on positive jobs data a few weeks ago, Fed Chairman Jerome Powell tempered expectations a bit on Wednesday. “We have to be honest that it’s a long road,” Powell said, adding that it may take years before the U.S. labor market returns to its 2019 vintage. However, he does think the job market has bottomed out at this point.

Powell also said easy money policies are likely to stick around for a few years. “We’re not even thinking about thinking about raising rates,” he said. Powell expects the central bank to keep rates at effectively zero until at least 2022.

The mixed assessment pushed stocks lower, notching their worst day since those steep March declines. But, after a few months of strong gains, it’s not surprising stocks took a pause. The decline may have been sharp, but at this point we think markets better reflect an economy that’s reopening, but not exactly at 100 percent — yet.

An Improving Outlook from Main Street: Small business owner optimism is moving in a positive direction. The NFIB Small Business Optimism Index improved to 94.4, a solid improvement over April’s 90.9 read. Owners are optimistic about future business conditions and expect the recession to be short lived, but they’re still unsure how quickly sales will recover.

The National Bureau of Economic Research last week said the 128-month economic expansion officially reached its peak in February. That marked the beginning of a recession, and the end of the longest expansion since 1854. However, in tune with small business owner sentiment, the NBER also indicated the recession could be fleeting.

“The unprecedented magnitude of the decline in employment and production, and its broad reach across the entire economy, warrants the designation of this episode as a recession, even if it turns out to be briefer than earlier contractions,” the NBER committee wrote in a statement Monday.

Job gains are lifting sentiment, with the highest percentage of consumers in the survey’s history expecting the jobless rate to decline in the months ahead. Still, two-thirds of consumers surveyed expect economic conditions to remain difficult in 2020, and nearly half expect another downturn due to a resurgence of the coronavirus.

While a record-level of income uncertainty remains, which could hold down spending, it’s being somewhat counteracted by low interest rates, low inflation (May CPI dipped 0.1 percent) and discounted prices on various goods and services.

A Quick Vaccine Update: Scientists continue to set a blazing pace on the coronavirus vaccine front. Here are some recent developments:

Retailer Round-Up: This week, markets will be paying close attention to retail sales figures from May. They’ll pale in comparison to May 2019, but the focus will be on the month-to-month trajectory of sales. Will we see a sales pick-up commensurate to the pace of reopenings across the country? Again, we don’t need to see retail sales fully rebound to their pre-pandemic levels to support markets. Instead, we just need to see more evidence that spending is trending in the right direction.

Housing Sector Strength? Mortgage rates set an all-time low on Thursday, dipping below 3 percent for a 30-year, fixed-rate loan. At the same time, the coronavirus has shrunk the supply of homes available for sale because sellers pulled out of the market (worries about contagion during showings and shutdowns limiting buyers were factors). However, that’s driven competition up for a smaller number of homes, as bidding wars are becoming more frequent. Low mortgage rates, limited supply, the economy reopening and prime home-selling season are all converging factors that could result in strong housing data this week.

Putting it All Together: We’ll also get the Conference Board’s Leading Economic Index for May, which is a collection of indicators that give us a sense of where the economy is headed. The LEI is a “sum-of-the-parts” metric that incorporates several different datapoints into one. In April, the U.S. LEI remained on a downward trajectory after posting its largest decline in March. 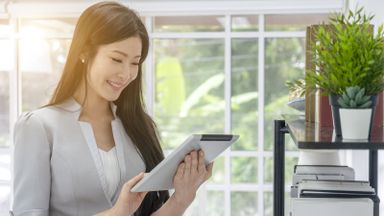