Last year was the first time in her adult life that Rachelle Dodson spent less than she made. Dodson, who is an attorney, started accumulating credit card debt when she was in law school, but hadn’t been too concerned about it. She had always figured she’d be able to outearn the debt after graduation.

Last year, after Dodson and her husband got divorced, her debt ballooned to $85,000 and included a car loan, 401(k) loan and a second mortgage. Dodson was a 41-year-old a single mom of a 5-year-old, and she was terrified of her debt. It was time to get serious.

Dodson’s turning point came during her yearly check-in with her financial advisor, Northwestern Mutual’s Rob King. “He asked me, ‘When are we going to get serious about this?’” It was exactly what Dodson needed to hear. The two started talking about her desire to get out of debt and came up with a plan to pay off the debt by 2019.

One thing that helped Dodson stay on track was setting up a repayment schedule. “I put my debt repayment goals in my calendar,” she says. On King’s recommendation, Dodson is paying her credit card (which has the highest interest rate) down first. She expects to have that debt paid off by Halloween. By January next year, she’ll have her car and 401(k) loan paid off. And by the end of next year, her second mortgage will be paid off. She’s leaving that until last because there are some tax benefits she gets while she has it.

Just knowing she has a plan and dates on the calendar has been a relief for Dodson. “Seeing it on paper gives me hope. I don’t have to live like this forever. I can make some necessary adjustments,” she says. “It’s just a couple of years building good habits and then I’ll be in a much better position.”

“It’s just so freeing. I feel so much more hopeful after seeing a year of progress.”

“In the past, if I ever had a windfall because of a tax refund, an inheritance, or a gift, I would immediately want to make a large purchase with it,” says Dodson. “Last year was the first year that I used all of those funds for debt repayment.” That allowed her to put a significant amount toward her debt that would otherwise have been quickly spent.

STEP 3: STICKING TO A BUDGET

Dodson worked with King to look for ways to cut costs so that more of her income could go toward debt. One thing that worked for her? Buying her groceries online. She found that she was able to avoid impulse purchases by staying out of the store. “When I order online, I can see exactly how much I’m spending as I build the cart,” she says. “When I pay, I know I’ve spent my budget and I’m not in the store tempted to spend on things I don’t need.” Dodson was able to cut $50 each week out of her grocery budget, saving her $2,600 a year.

STEP 4: TAKING ON A SIDE GIG

Because she shares custody with her ex-husband, Dodson decided to make use of the nights her daughter was at her father’s to make extra cash to put toward her debt. “I took a second job driving for Uber,” she says. “It didn’t require any money to start. It was very flexible. On the nights my daughter was with her dad, I would just drive for extra cash to throw at the debt.”

CLOSER TO THE GOAL

While Dodson isn’t debt-free yet, she’s made significant progress. She’s already repaid $30,000 in her first year. “It’s just so freeing. I feel so much more hopeful after seeing a year of progress,” she says. “I just need to do this for two more years. It feels very attainable. After living so long just making minimum payments, when I saw the numbers actually going down, it gave me such a feeling of accomplishment.” 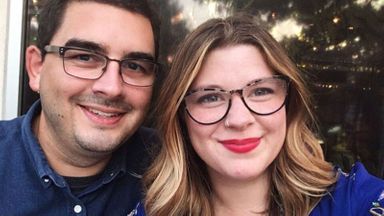