Signs that election season is heating up are everywhere. TV and radio offer a steady drumbeat of ads for or against candidates, political yard signs are sprouting up on lawns across the country, and many social conversations are taking on a political tone. The elevated engagement is natural. Elections are important. They allow us to voice our opinions on candidates we feel best reflect our personal views on the topics that are most dear to us.

Not surprisingly, the importance of choosing leaders to represent us in Washington can lead to heightened emotions as debates over candidates and policy in the political realm take on added urgency. Unfortunately, it can also lead to poor decisions when applied to investing. While navigating these strong opinions can be delicate, it’s important to remember that long-term financial success is not based on whether the candidate or party that most closely aligns with your political viewpoints wins an election. In turn, your financial goals should not change based on which party controls the levers of power in Washington.

To illustrate the perils of making significant changes in your portfolio based on election outcomes, we took a look back at every U.S. midterm election since 1950 and found that the markets don’t see blue or red — both political parties have presided over periods of strong returns, as equity performance is primarily driven by the economic cycle, not politics.

It’s the business cycle, not the election

Presidents and party control of the legislature can have an impact on the near-term prospects of specific industries; however, that effect is usually fleeting and far from certain. Oil prices during the Trump administration offer just one example of this dynamic. Although the administration eased regulations and sought to create a more favorable regulatory backdrop for the fossil fuel industry, oil prices sagged due to the lack of demand during the COVID shutdown, and shares of oil companies sank. Fast-forward to the Biden administration, which has favored alternative sources of energy investments, and the results have been flipped. Oil prices have skyrocketed thanks to increased demand, and energy companies have booked record profits. This illustration serves as a reminder that regardless of policies and political agendas, stock market returns are more closely tied to economic activity than the party in control of the White House or Congress.

Stock market valuations are typically higher later in the business cycle. So as you might expect, politicians of either stripe elected at the beginning or middle of a business cycle — when the economy is experiencing above-average growth rates — have historically presided over stronger returns than those voted into office late in the cycle, when economic growth is receding from peak levels. This is illustrated in the chart below.

The impact of gridlock

Another concern that we often hear from investors is regarding the impact of a divided government on the markets. Here, too, history suggests such worries are unfounded, as the stock market has largely been immune to the threat of gridlock. The belief among some investors that a divided government, or lack of one party having control over both the executive and legislative branches at the same time, is a hindrance for the stock market is unfounded based on historical data. A look back, from 1949 through 2022, shows that market performance has been consistent regardless of political regime or party.

While much of our analysis highlights that elections have little impact on long-term market performance, we did find one area in which there appears to be a correlation between the election cycle and market returns in the short term. However, this too may be tied to economic expectations that follow midterm elections.

Regardless of party, it is not unusual for the sitting president to lose seats in both the House of Representatives and the Senate following the midterm election. However, this trend has generally had little impact on stock market performance, as equities have tended to post strong results no matter which political party is in the majority.

A president’s Gallup Job Approval Percentage tends to have an inverse correlation with the number of seats lost during midterm elections. Put simply, the less popular the president, the more seats that party loses in midterm elections. However, large Congressional losses do not necessarily predict poor forward stock market performance. Looking at the four most recent “wave” elections in the House of Representatives (1974, 1994, 2010 and 2018), the markets have posted double-digit gains in the 12 months following the election 75 percent of the time, with an average one-year return of 15.4 percent. Similarly, in the four most recent elections that saw six or more Senate seats flip (double the normal turnover), the S&P 500 moved higher in the following year, posting an average return of 11.1 percent. For context, since the election of 1949 — which marked President Harry Truman’s election to a second term — the average one-year return for the S&P 500 is 9.3 percent.

One theory as to why returns have been so consistent following a midterm election is that in the first two years of a presidency, the focus is more on broad campaign promises that helped the president’s party win the White House. Later in a term, the president and members of both houses prioritize economic growth, which appeals across party lines and may boost an incumbent’s chances of getting re-elected. Again, it is the economy that is most closely tied to market performance — not politics.

Voting is a treasured tradition in the United States, and we encourage everyone to exercise the right to cast a ballot come the second Tuesday of November. However, we believe when it comes to investing, it is perilous to let your political beliefs dictate your investment decisions. Regardless of the political stakes that accompany midterm elections, stock market performance tends to be strong; investors who have stayed the course have seen the stock market average an 11 percent total return since 1949, regardless of which party comes out on top. It’s important to consider the damage to a long-term financial plan that could be inflicted by missing out on these periods of positive returns if you allow your political views to dictate your investment decisions.

Investing with Northwestern Mutual affords you the unique opportunity to grow your wealth while protecting everything you’ve worked so hard for — no matter where you’re starting from. Let us help you resist the urge to change your long-term investment strategy this election season by looking past sensationalized media headlines and focusing on the importance of staying invested through multiple market cycles and events.

The opinions expressed are those of Northwestern Mutual as of the date stated on this material and are subject to change. There is no guarantee that the forecasts made will come to pass. This material does not constitute investment advice and is not intended as an endorsement of any investment or security. 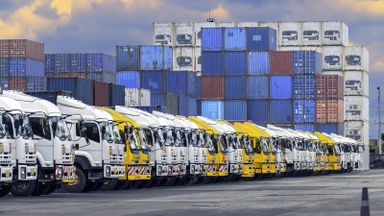