When I decided to move in with my then-boyfriend, Adam, in 2014, we were not on equal financial footing. He earned a lot more as a corporate analyst than I did as a marketer for a nonprofit, and on top of our income disparity, I was moving from a rental into a house he owned. Conditions were ripe for disagreements about money.

At the risk of sounding like a buzzkill, I kept the worst-case scenarios in the back of my mind because I know the topic of shared finances with a partner can be tricky. You might find that one person grows resentful — especially the one with a pitiful bank balance whose partner is swimming in gold coins like Scrooge McDuck.

Plus, what would happen if we broke up? I’d heard the stories: One person gets all the dishes; the other gets the bed. One person stays in the apartment but the other needs to find a new place to crash, fast. Inevitably, someone loses custody of the dog. I wanted to split expenses as fairly as possible, but I also wanted to protect myself in case things didn’t work out.

DECIDING ON A METHOD

Adam and I agreed that it was important to set expectations before we moved in together, so we frequently discussed our soon-to-be-shared finances in the months before the move. At first, I assumed we would share the mortgage payment 50/50. After all, I would be living in the house just as much as he would. But Adam proposed an alternative: Instead of paying half, I should only pay 35 percent. That number sounded great to me — I'd happily take a discount on my rent! — but it came with a mathematical justification.

Why 35 percent? If you took the sum of both our salaries, I was earning about 35 percent of the whole pie, and he was earning 65 percent. If we evenly split the mortgage, it would leave him with a disproportionally high amount of disposable income, while I would spend a higher proportion of my paycheck on rent, leaving me with less cash to save or spend.

Plus, he reasoned, why would he want a new stream of disposable income every month if it meant I’d have to scrape by? By splitting bills proportionally, we could both buy new clothes, go on vacations or save up for other big, non-shared expenses. So I paid 35 percent of the mortgage, 35 percent of the electric bill, 35 percent of the groceries and 35 percent of every other shared expense. Our prorated bill-splitting carried over into our social lives, too. If we both took a Lyft or went out for dinner, we split it 35/65 (unless it was a date — then we would gift each other).

We also talked about other types of expenses. Major home improvements and structural upgrades were his responsibility — projects like a bathroom remodel or buying replacement windows. When he bought a new couch, I didn’t pitch in, because if we broke up, the couch would be his (plus, there’s no good way to split a sofa in half). Any decorative touches I wanted would come out of my pocket. I felt safe in our system, and we were comfortable enough with each other to acknowledge that no relationship comes with a guarantee of happily ever after. We certainly hoped we'd never break up, but we weren't naive.

“I wanted to split expenses as fairly as possible, but I also wanted to protect myself in case things didn’t work out.”

WORKING IT OUT TOGETHER

There was one downside to our method: bookkeeping. We spent a fair amount of time updating a Google spreadsheet, logging the amount whenever someone paid a utility bill or bought groceries. At the end of the month, one of us had usually contributed more of our total expenses than our prorated percentage, so we would have to square up before starting fresh the next month.

This data entry could be cumbersome, and sometimes I’d have to nudge Adam after he went weeks without updating his expenses or when he owed me for a lopsided month. Still, we felt it was easier to reconcile our books once a month than it was to split every bill in real time. Although it required some legwork (and a calculator), the time was well worth it. It helped us avoid awkwardness and resentment, and it got us talking honestly about money in the early stages of our relationship.

Those conversations gave us a foundation that became especially important after we got married. Although we could have continued with the prorated method, we live in a community property state, which means that as spouses we both equally "own" our earnings, so it made sense to combine our money. But that doesn’t mean we’ve stopped discussing our finances. Instead of talking about how we’re going to split the bills, we're now figuring out the best way to pay for renovations on our fixer-upper and save for retirement.

The way we chose to approach our finances as a couple may not sound romantic. But for us, it was the most egalitarian solution — and it started us off on the right foot when it came to our money. What’s not to love about that? 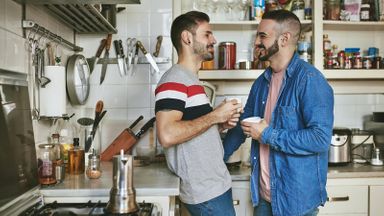 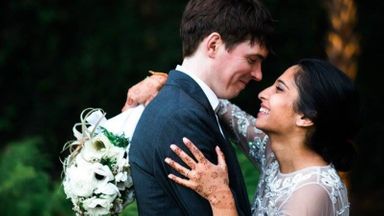 How We Merged Our Finances Before Getting Married 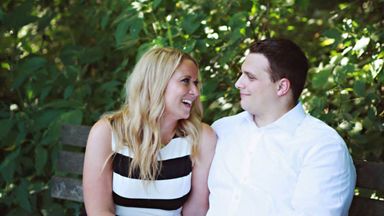 My Husband Earns Twice My Salary. Here's How We Play an Equal Role in Our Finances