Most people living today never had to quarantine in their home. Few could recall seeing vacant streets in major cities. Social distancing was a foreign concept a month ago. This is all new for most of us.

But there’s a silver lining: We know a lot more this week than we did last week.

We expected policymakers to take swift action to support individuals and the economy, and they did. The Federal Reserve has been injecting liquidity to stabilize markets, and President Donald Trump on Friday signed into law an historic $2.17 trillion emergency aid package that directly supports Americans. It isn’t necessarily a cure-all, but it’s a plan, and that puts us in a better place than we were a week ago.

We’re seeing social distancing can work, but we also know how it affects business activity. That’s why a dramatic spike in unemployment claims and a decline in consumer sentiment last week wasn’t a surprise — we knew it was coming. The U.S. now leads the world in confirmed cases and medical experts believe that tally will grow in the weeks ahead, and sadly so will deaths. But the experts also expect new cases will eventually peak and start to decline.

No doubt, things feel chaotic, but with each passing week we learn more about the path ahead. Here’s what we learned this week.

Congress Passes Historic, $2T Aid Package:  After a week of back-and-forth negotiations and delays, Congress passed a much anticipated, $2.17 trillion aid package on Friday. It’s the largest emergency aid package in history, and Congress acted in record time. Details are still broad, but the measure includes $290 billion in direct payments to Americans, $250 billion to scale up unemployment insurance, $150 billion for public health, $500 billion in loans and other money for corporations and $376 billion for small businesses.

This third, and largest, installment of coronavirus aid came just 11 weeks after the first coronavirus death in China (lawmakers are already discussing round four, if needed). In 2008, it took 80 weeks after initial signs a financial crisis was looming for Congress to approve the $787 billion American Recovery and Reinvestment Act. Taken together, the Federal Reserve and Congress have pulled lessons from 2008 and are taking swifter, bolder actions earlier in a crisis.

It may not be a perfect solution. However, we think it buys us time economically to confront the virus. It may also “freeze” financial conditions so that, when we do solve this, economic activity can resume from a more solid foundation.

An Economic Time Capsule … From February: There’s a reason Congress would love to freeze our pre-pandemic financial conditions … they were pretty good. In our final rounds of data from February, you could still see those green shoots. Personal incomes and spending rose in February, primarily driven by compensation increases for workers. Homebuilders sold 765,000 houses at a seasonally adjusted annualized rate in February, which is a 14.3 percent increase compared to 2019. It was the second-highest month for new-home sales since 2007. While we can’t say what the numbers will look like going forward, the economy’s pre-pandemic strength has been a source of optimism in an eventual recovery. This is a good reminder.

Unemployment, Consumer Sentiment Falls: We knew it was coming, which fueled urgency in Congress last week, but the advance figure for seasonally adjusted initial unemployment claims for the week ending March 21 hit 3,283,000, up from 282,000 the prior week. Last week marked the highest level of seasonally adjusted initial claims in the history of that metric, far exceeding the previous high of 695,000 in October 1982.

The University of Michigan Consumer Sentiment Index plunged 11.9 points to a three-year low of 89.1 in March. It’s the steepest month-over-month decline since 2008, and most respondents expect more difficult financial times ahead. Both sentiment and unemployment figures, of course, reflect the impact of social distancing closures and cancellations. The fact stocks climbed sharply on Thursday, the day unemployment claims surged, indicates the numbers weren’t much of a surprise.

American Businesses, Society Providing a Lift: In addition to policymakers, we saw American businesses throw their weight against the coronavirus fight. Amazon, Kroger, CVS and other companies announced they are, collectively, hiring hundreds of thousands of workers to handle a surge in demand for groceries, drugs and other necessities. Other companies providing essential services raised wages for employees. President Trump on Friday ordered General Motors to begin manufacturing ventilators. Google is donating $800 million to the fight, including free ads for small businesses. 3M doubled respirator manufacturing capacity. Alcoholic beverage makers are shifting manufacturing lines to produce hand sanitizer. Abbott Labs developed (and the FDA approved) a 5-minute coronavirus test that’ll be ready this week.

We’re probably glossing over many other examples, not to mention the millions of ways neighbors are helping neighbors across the country. We’re seeing people come together, and that gives us even more confidence that good times are ahead.

Beware the Volatility Game: It’s hard to believe, but over three days last week, we had a bull market in the fastest rally since the 30s. That follows on the heels of the largest one-day decline in stocks since 1987. Has the market bottom? Will it instead retest new lows? Nobody knows. However, history suggests those who own stocks and stick with their plan tend to be rewarded in the immediate to long term.

The past few weeks have been historically volatile in stock and bond markets, and that’s likely to continue this week. But don’t get caught up in the volatility game. Don’t let panicked sellers, algorithms or day-traders with funds and speed pull you from a well-defined strategy. The best course of action is to carry on with the financial plan you’ve constructed with an advisor. Even the most volatile markets shouldn’t alter your focus on the long term.

The Numbers We’re Watching: Once again, we expect data will deteriorate as outbreak effects ripple through the economy. This week, we’ll get more comprehensive March unemployment figures, along with payrolls and earnings. 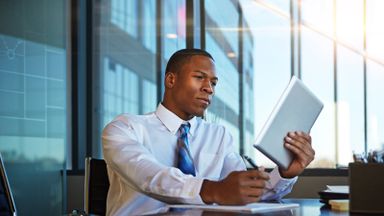 Why We’re Looking Past a Sluggish Jobs Report