Nicole and Keith Bernardo dreamed of a backyard pool — the perfect place where family and friends could gather and make lifelong memories.

When they moved to Andover, Massachusetts, three years ago, their new house had just one problem: It didn’t have a pool. But it did have a backyard big enough for one. And at the beginning of 2017, they decided the pool had been on their dream list for long enough. They were ready to take the plunge and build their dream backyard oasis.

“Both of our jobs were in good places, our family was complete and we were itching for something else,” says Nicole. “So, we said, ‘There’s no better time than now. We might as well do it and start enjoying it today.’”

But when they started getting quotes from contractors, they were shocked at the price tag. “The numbers were bigger than what we expected for what we wanted,” recalls Nicole. “And if we were going to do the project, we obviously wanted to do it the way we wanted.”

That’s when Keith had an idea: They could do it themselves to cut down the cost without having to sacrifice any of their wish list items. Based on their research, they thought they could complete the project for about $70,000 — almost half of the lowest quote they got, which was $120,000.

The Bernardos dove into their DIY project. Since neither had experience installing pools, they spent hours researching, reading reviews and forums, watching YouTube videos, comparing prices and talking with contractors.

Because Keith owns a manufacturing business, they got contractor pricing for some of the materials they needed, and they used online vendors for materials like fencing and to purchase used equipment (which they later re-sold) to help keep costs down.

But the biggest money-saver was the labor and expertise they received from family and friends in exchange for “beer, pizza and unlimited access to our pool,” says Nicole. “They were vital to our success.”

“There’s no better time than now. We might as well do it and start enjoying it today.”

Both Nicole and Keith’s parents donated endless time (including babysitting their two children, who were 4 and 2 at the time), along with a handful of friends who brought different skills to the table. “We were very lucky to be able to utilize other people with knowledge in areas that don’t come natural to us,” says Nicole. “This was not a one-man show. It takes an army.”

And without their budget being eaten up in labor costs, they were able to splurge on the features they wanted, like a saltwater system, a heater to maximize the relatively short northeastern pool season and the largest fiberglass pool insert that can be transported in the state of Massachusetts, complete with a tanning ledge and a shallow area for their kids.

“I kept saying to my husband, ‘This is not necessary, can we just go down a size?’ but he was like, ‘Nope, this is the pool for us. If we're doing it, we're doing it big.’ 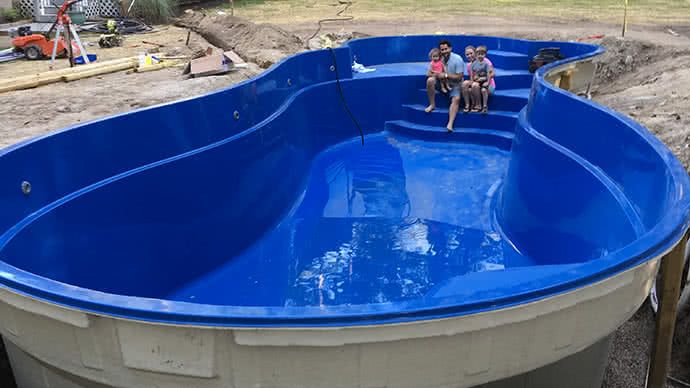 The family sitting inside their larger-than-life fiberglass pool insert. Courtesy of Nicole Bernardo

ENJOYING THE FRUITS OF THEIR LABOR

Including a delay transporting their extra-large pool from New Jersey, the project was complete in August, just a few months after they started it in May for a total of $78,000 — saving them thousands by going the DIY route.

With the exception of a few items they put on credit cards and pay monthly, their pool is paid off. They allocated some of their savings and travel budget to fund the project.

And while some people thought they were crazy to take on a project this big themselves, they think the memories and the example they set for their children made it more than worth it.

“To have my 4-year-old out in the yard with dad, at all hours of the day, and being able to show determination and work ethic and that when you set your mind to something, anything’s possible — for him, at 4, I think that’s a memory he’ll always look back on,” says Nicole. “He tells everyone he built a pool.”

And now with the hard work behind them, they’re looking forward to the future memories they’ll make with family and friends, all without having to leave home.

"Looking back, the reason why we did it was our family," says Nicole. "We want everyone to be able to hang out and be together." 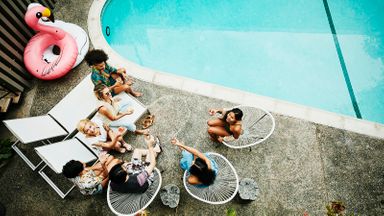 How One Couple Built Their Dream Backyard 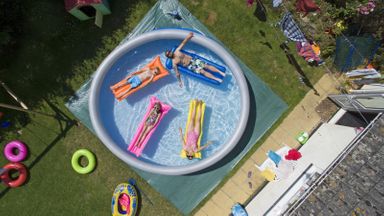 5 Ways to Upgrade Your Backyard on Any Budget 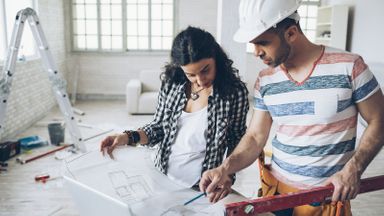 How to Hire the Right Home Contractor