The Federal Reserve on Wednesday announced a quarter-point increase to its key interest rate and held steady on plans for another rate hike later this year, which would bring the total to four rate hikes in 2018.

It’s a move that signals a strong economic outlook but will also raise borrowing costs for variable-rate loans such as credit cards, car loans and adjustable-rate mortgages. On the other hand, interest earned on savings will climb modestly.

Since 2015, the Fed has now raised interest rates eight times to slowly roll back its efforts to stimulate the economy after the financial collapse more than a decade ago. But the Fed needs to strike the right balance moving forward. Ramping up interest rates too aggressively could cause the yield curve to invert, a situation in which short-term bond yields exceed long-term yields. An inverted yield curve has preceded the past seven recessions, and it’s widely viewed as a harbinger of an economic downturn. To avoid this, the Fed could decide to let the economy run “hot” and allow the inflation rate to rise higher than its 2 percent.

“If we move too quickly we can snuff out recovery, or if we move to slowly the economy can overheat.” We’re always trying to navigate between those two goals,” Powell said.

“I believe that the Fed gets to put the final nail in the coffin of every economic cycle by raising rates,” Schutte says. “They’re not going to get chastised as much if they let inflation run hot versus if they tighten too quickly and have the economy fall apart.”

For people who lived through the Great Inflation of the 1970s and 80s, the word “inflation” may cause concern. Those years were marked by rapid increases in the price of goods. At its peak in 1980, the Consumer Price Index reached 14.8 percent in one year, which meant every dollar in your pocket bought you 14 percent fewer goods and services from one year to the next. To combat double-digit inflation, the Federal Reserve drove interest rates higher and mortgage and car loan rates hovered near 20 percent.

The high costs of just about everything put a strain on the economy, and the unemployment rate hit 10.8 percent in 1982. However, today the economic backdrop is pushing the Fed to alter its view on inflation.

Back in the 70s and 80s, unemployment, inflation and interest rates all rose together in a vicious circle. Today, it’s a different story. Companies are finally channeling the money back into their operations which should ultimately lead to productivity gains that can help foster further economic growth while keeping inflation at bay. There are more jobs available than people looking for work, which typically translates into higher wages down the road. Schutte says the combination of rising wages and increased productivity is a sign the economy has hit a “Goldilocks zone” of sorts.

“If wages are rising alongside productivity, the economy has more room to run despite labor shortage issues,” Schutte says.

Even if inflation grinds above the 2 percent Fed target, Schutte thinks the Fed will choose to sit back and let it continue moderately climbing. And, given the comments from Powell today, it looks like the Fed may let inflation rise to the upper band of their target.

Moving forward, Schutte is confident of one thing when it comes to rate hikes moving forward.

“The Fed is going to act with a velvet touch,” he says.

This article was updated on Sept. 26 to reflect the Federal Reserve's decision to raise rates by a quarter point and new comments from Fed Chairman Jerome Powell. 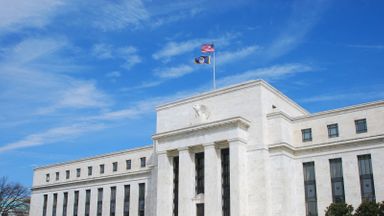 Why Investors Care About the Fed's Balance Sheet