If investors grabbed for antacids last week, there was good reason. Only eight other times since 1970 has the S&P 500 Index reversed itself to such a stomach-churning degree as it did last Wednesday and Thursday. At a time of such dramatic volatility, it may be helpful to view what’s going on in markets and where we are likely headed in the context of four fundamentals.

To put last week’s moves in context and give investors a coherent and actionable framework, let’s look at those moves through the prism of those four basics — the economy, policy (primarily monetary policy but also fiscal policy), valuation and market mood.

The economy and signs of strength. Obviously, the big concern for everyone, including the Federal Reserve, is inflation. After Wednesday’s widely anticipated 50-basis-point interest rate hike and Fed Chairman Jerome Powell’s remarks about how steeper rate hikes are now off the table, markets soared.  The next day, anxious investors reconsidered their optimism as longer-dated Treasurys rose, imparting downward pressure on equities, especially growth stocks, resulting in the Nasdaq falling into a correction. An overlooked silver lining in the downdraft was that the previously inverted 2-year/10-year Treasury yield curve steepened to nearly 40 basis points, perhaps a sign that a less aggressive Fed will foster continued economic growth.

A better bit of economic news came on Friday, when figures on April non-farm payrolls were released, showing 428,000 jobs added during the month, beating expectations of a 390,000-jobs increase. While the pace of gains is slowing, the breadth of hiring by industry is extraordinarily high, which is great news. Labor force participation was a bit of a drag, but the unemployment rate is still historically low, and slowing average hourly earnings should ease fears about spiraling labor costs since the numbers reflect the most recent data, not the quarterly measurement that spooked markets on Thursday.

Finally, there was the ISM manufacturing PMI data, which fell overall but remained in expansionary territory at 55.4. Importantly, when you dig into the numbers, they point to possible easing of future inflationary pressures. Order backlogs fell to 56, the lowest level since October of 2020, and new orders fell to 53.5, the lowest since May 2020, while customer inventories rose to the highest level since December 2020. For manufacturing, where much of the effects of inflation were immediately reflected, that means we are seeing new orders dropping, backlogs clearing and customers again having inventory on hand. That’s great news on the inflation front. It also supports our belief that rising prices will moderate soon even though the market is concerned otherwise.

Policy that’s moderate. In the key area of monetary policy, we saw the Fed move overnight rates to the range of 75-100 basis points and Chairman Powell saying that Fed governors are not actively considering 75-basis-point hikes, which is significantly more dovish than prior news conferences. The Fed has been transparent about where it is headed and where it wants rates to be — between 2 percent and 3 percent, which it sees as the neutral rate (one that is neither stimulative nor restrictive). And it wants to get there sooner rather than later. Despite last week’s move being only the second rate hike in this cycle, Chairman Powell accurately noted that financial conditions have already tightened significantly. Inflation expectations actually went lower last week, not higher. Two-year Treasury securities reflect the Fed’s desired state — they are now trading around 2.7 percent. Last October, they were barely above 25 basis points. Meanwhile, 30-year mortgage rates have risen from around 3 percent in 2021 to 5.5 percent today.

In conjunction with this shift, yields have risen across the curve and bond prices have adjusted at every point. The Fed is also going to start selling down its balance sheet soon, easing into it at first but then ramping up to a pace of about $95 billion per month. All in all, we continue to believe the Federal Reserve is going to move quickly now to get policy closer to the neutral rate, but then slow down hikes substantially with an overall goal of not tightening the US economy into a recession. While risks remain, but we believe the Fed’s task is less daunting than what is currently being priced in by markets.

Average valuations. We believe all assets trade based upon relative valuation, and the repricing in the bond market has resulted in a repricing of the stock market. Much of the recent movement in equities, especially the dramatic shift last Thursday, reflects the valuation impact of those higher interest rates. This has had a disproportionally large impact on growth stocks, with even the profitable technology stocks feeling an impact. For example, Amazon is down about 30 percent year to date; Apple is down 12 percent; Facebook, 38 percent; Google, 19 percent; and Netflix is down a heart-stopping 68 percent.

So where does that leave us? Perhaps in a state of greater realism. Money must cost something, or investors wouldn’t care about making good strategic decisions with their capital. With long-term Treasury yields now around 3 percent and the S&P 500 trading around 17 times earnings compared to the long-run average of 16 times, investors are not too far overboard buying here from a valuation standpoint. That’s especially true if our base case is correct and inflation tapers off. As far as fixed income is concerned, the two-year bond at 2.7 percent isn’t a bad deal, assuming the Fed completes this hiking cycle soon.

To recap: The economy is in fairly good shape. Monetary policy is getting tighter, but not overly so. Valuations are pretty decent, and the market’s extreme negative mood has proved to be a contrarian indicator and is therefore actually quite bullish. While last week’s market was a roller coaster, our long-term view hasn’t changed. We will watch inflation, which may get worse and cause more volatility in the near term, but we are expecting inflation to abate, the signs of which are already appearing. Now is the time to stay calm and carry on.

Following last week’s market-moving announcements, this week’s news is likely to be digested more calmly. The biggest releases will come Wednesday, with the Consumer Price Index for April, and on Thursday, with the weekly data on jobless claims. 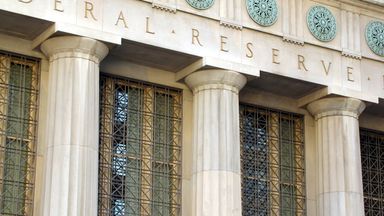