Don’t tell Barbara Tidwell that her brand-new house is hers. She’s adamant that it’s the family’s home. On any given day, Barbara, 81, may find one of her four children, nine grandchildren or 13 great grandchildren calling on her. They all live within an hour of her in the Nashville area so they drop by often, usually to enjoy the sourdough bread that she makes regularly from a starter passed on to her by her mother decades ago.

After her husband, Homer, passed away in 2016, Barbara’s family talked her into tearing down the couple’s aging home and building the brand new one. They wanted a home where she could live out her life and where the whole family could make memories together. This past Thanksgiving, the entire family — 39 people — did just that, spending the holiday together. “It's just sheer joy to see all of them loving each other and enjoying each other,” Barbara says.

The best part: Barbara is able to enjoy the time with her family and friends without having to worry about her finances.

THE PLANNING THAT MADE IT POSSIBLE

Barbara met Homer in the mid-1950s when the two were working at the same bank. "He called to ask me if I would go out with him sometime,” she says. “I said, ‘I don't know.’ He said, ‘What do you mean you don't know? It's either yes or no.’ ” Barbara’s yes turned into “I do” about six months after their first date. “We were married 59½ years to the day,” Barbara says.

Homer, who spent his career in banking, had planned well for retirement. In addition to investments, he and Barbara had a sizable Northwestern Mutual permanent life insurance policy. “He always called the policy one of the best assets we owned. We'd watch the markets go up and down with our investments. But the value of the life insurance just went up,” Barbara says.

When he passed, Barbara and her daughters (who help her manage her money with the help of her Northwestern Mutual financial advisor, Matt Self) were able to use the death benefit from the life insurance to establish a trust that supports her and will eventually leave a legacy for her family, which was one of her big goals. They also used some of her investments to buy an annuity so that she could be confident that she’d have regular income for as long as she lives.

Once her financial situation was in a good place, it was time to make a decision about where she would live. "Homer made me promise several times that I would go to assisted living. He did not want me to remain in our house, as it needed several big repairs,” Barbara says.

Barbara’s daughter, Tish, who works as an appraiser, was the first to suggest the idea of tearing down the home and building a new one that would suit her needs as she got older. She spoke with Matt and was glad to learn that her mom had plenty of money to build the home, cover her daily expenses and still leave behind the financial legacy that Barbara wanted. Tish knew builders she trusted, and so they got started.

It took 15 months to demolish Barbara’s old home and build the new one. Once it was finished, her daughters sent her away for several days so they could decorate it.

The home has special features that will allow Barbara to age in it. There are no steps to get in. Her bedroom is on the first floor. All the doors are extra wide, and her bathroom is designed to accommodate a wheelchair. “We can have 24-hour nursing care here and there would be plenty of room. We can stay here, too. We have the upstairs, so there's more room. It's just a nice security blanket for her,” says her oldest daughter, Amanda.

Perhaps most importantly, the home has a beautiful kitchen and open living space where the family can gather. She’s using the kitchen to teach her daughters and grandchildren how to keep the family’s sourdough starter alive and make the bread. It’s just one piece of a wonderful legacy she and Homer will leave their growing family. 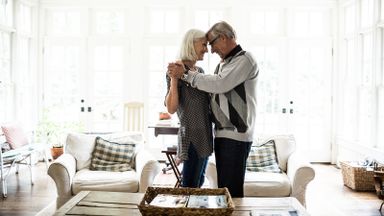 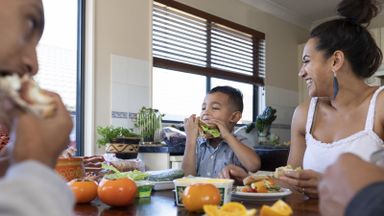 How to Build a Life Insurance Plan for Your Family

Do You Need Life Insurance After 65?